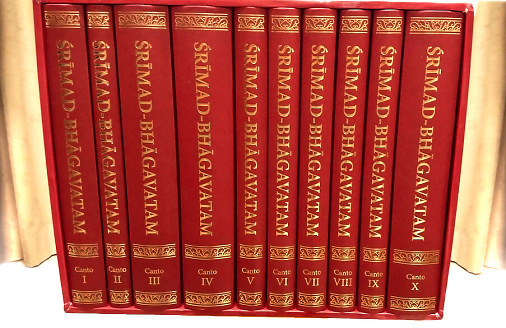 “…My concern is these sets should not interfere with the other bbt divisions sales. It is obvious certain persons hate the established authority. With such a mood how will such persons be able to respect the geographic areas were bbt is working? They haven't in the past. I saw myself selling of the pocket gita in our India temples. That is wrong it is outside the framework of kbi license. Still it goes on and is a major portion of kbi sales.”

“…There are concerns about these sets and no one was going to address them. kbi is small time with few small books and a poorly printed gita or some on chantings. No big dent in sales. This is different these 5000 sets where going to disrupt the iskcon effort to sell more sets. New format, cheaper price (because no structured markup) and being sold by persons who hate the bbt trustees and hate the iskcon guru system. So am I suppose to just role over and play dead? “

Bhima is only concerned about the KBI books disturbing his sales market. So it has nothing to do with copyright infringement. He wants to control what is not his right or duty to control. Nor is it the right place or right procedure to try and control it. It has to be done in California and follow the strict guidelines of the license agreement for dispute resolutions.

KBI publications being exact reproductions and reprinting of Srila Prabhupada's exact approved pre 1978 writings are certainly authorized and even for ISKCON related market which Srila Prabhupada certainly intended them for, and which we have all been doing all our life with out cessation, so why we should stop now? Let those who want "JAS edition" over "Hayagriva's Edition" have them, but those who want Prabhupada's unchanged books either in ISKCON, out of ISKCON or even out of planet earth have them.

Also the books are not even in the market, so Bhima can only speculate about how they may affect the market. The problem is that he feels the whole world is his commercial market and has lost the missionary spirit of spreading of knowledge as our main mission. He says he doesn't want to go to court but he took it to court. His claiming to be the publisher of the sets he produces indicates clearly that he wants no competition for his business. He therefore does not represent the original spirit of purpose or reason why Srila Prabhupada started BBT India in the first place.

In the Mood of Cooperation article it is stated:

"Another part of the settlement is a liberal licensing arrangement that allows for cooperative publishing. Under this arrangement, Hansadutta Prabhu and the devotees working with him will form a company that can publish Srila Prabhupada's books in the editions published before 1978. These will be available for sale in markets where they won't directly compete with distribution by the BBT and by ISKCON temples."

Who decides where KBI can market Srila Prabhupada's books?

There is no need for anyone to try to twist the cooperative licensing agreement made by the BBT to print the original books into sounding as if it's against Srila Prabhupada's desire.

It seems that ISKCON market is far reaching and worldwide, and so how to determine among the over 500 ISKCON splinter groups and thousands of individuals who is ISKCON and who is not? Or even among those who say they are ISKCON, whose market do they belong in (by hook or crook distribute the books)?

Did Bhima make himself the publisher for BBT India so that he could make a profit for himself? He is not answerable to anyone, so who will check him. Reliable sources have indicated that the temples in India have asked for accountability from Bhima numerous times but he has refused to give any accounts, saying that the accounts are for BBT internal use only.

This guy is out of control and needs to be reined in. Now he has started an expensive court case to protect his business interests, using BBT money. Will someone call him to account? Let us hope so for the sake of Prabhupada's BBT.

We all know that some of the powers that be are overstepping the power and mandate that Srila Prabhupada honored them with, and are subject to the four defects of the conditioned souls, so how they can make absolute decisions over their own god-brothers, Srila Prabhupada's original books and so forth.

The fact is, they do not really care for Srila Prabhupada's mission. They called him "hired hand" to gain control of BBT assets and changing his books, thus perverting his philosophy.

When was the last time BBT published 5000 sets of English Bhagavatam? Srila Prabhupada would praise anyone for printing 5000 sets of His original Bhagavatams. They can not and will not do it and will not allow any one else to do it. They are shameless rascals, who can not be trusted, lying and cheating. They can not speak truth - it is against their demoniac nature - they are driven by greed, power control and envy.

Srila Prabhupada says "A criminal will not accept any amount of reasoning, he has to be defeated by force".

The new appointed BBT/ BBTi trustees are mainly trying to stop the printing of Srila Prabhupada’s original, unchanged books for commercial reasons. They are afraid that the 5000 sets Bhagavatam will invade their ISKCON sales market, threatening their money screwing business.

But Krishna's plan will be successful and eventually thousands of devotees will be enlivened again to distribute Prabhupada's unchanged books and actually be able to support their families also. BBT has momentarily stifled all of that but their devious actions are soon coming to an end.

Srila Prabhupada: ".... I have also heard that you are making plans for a very large order of my books from the BBT to be sold on a door to door basis on the style of the encyclopedia sales. If you can do this it will revolutionize our book distribution and afford greater spreading of Krsna Consciousness than any book distribution thus far. I want that every respectable person has a full set of Bhagavatam and Caitanya Caritamrta in his home." (Letter to: Alex, Bob, Drdhavrata, Gupta, Rsabhadeva, Stan, Bhuvaneśvara 24 January, 1977)