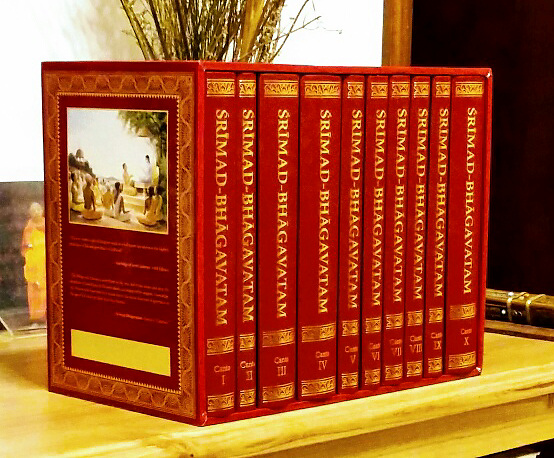 “This Bhāgavata Purāṇa is as brilliant as the sun, and it has arisen just after the departure of Lord Kṛṣṇa to His own abode, accompanied by religion, knowledge, etc. Persons who have lost their vision due to the dense darkness of ignorance in the age of Kali shall get light from this Purāṇa.” (SB 1.3.43)

BBT disgraces the pure Srimad Bhagavatam with translations of conditioned souls, degrading transcendental literature to the mundane platform of their money making business.

The problem with Iskcon BBT is that they have already planned for quite some time to print their own concocted Bhagavatam-Set including Hridayananda’s bogus 11th and 12th Canto, selling it as “Srila Prabhupada’s Complete Set”, just for their money screwing business  enterprise.

What else but pure unadulterated envy of Srila Prabhupada would make them attack Srila Prabhupadas original, unchanged books. These living books where produced by devotees as “labour of love” for an offering of love and devotion to help Srila Prabhupada in his mission to spread Krishna consciousness.

It is clear that they have contaminated the pure Bhagavatam of Srila Prabhupada by adding the translations of unauthorised and unqualified conditioned souls. They are fighting for this concoction of changed books, not for Srila Prabhupada. They even lie in their 39 year late copyright registration in India that the later chapters of the 10th canto and all the 11th and 12th cantos are authored by Srila Prabhupada.

Worse than that, they are holding Prabhupada and Krishna prisoners in their own books holding them hostage for ransom and dictated terms of a so called negotiated settlement.

Hridayananda: (Howard Resnick) a self-appointed false GBC ISKCON "guru", wrote in the Eleventh Canto of his bogus "Srimad Bhagavatam" that the two worst paedophile Iskcon gurus and child molesters [Bhavananda and Kirtanananda] are his examples of acaryas to worship as new "successor-gurus", thus perverting Iskcon and Srila Prabhupada’s pure philosophy, as well as the Bhagavatam itself.

Srila Prabhupada appointed Pradyumna Prabhu to finish translating Cantos 10, 11 and 12 of Srimad Bhagavatam, but Hridayananda (Acaryadeva) has stolen this service from Pradyumna and helped to kick him out of Iskcon by declaring him a demon. Hridayananda's unscrupulous usurpation of Pradyumna's sacred service marked only the start of his now 40 year treachery GBC-teamwork trend of perverting Srila Prabhupada's books, kicking out dedicated devotees.

My Dear Pradyumna, Please accept my blessings. I have received the transliteration of Brahma Samhita and also your letter of February 14, 1968. I am very much pleased with the nice job you have done.

Presently I am using one copy of the Gita Press version of Srimad-Bhagavatam in connection with my translating work, but in due course I may send it to you and you may transliterate the second and third cantos at that time. So if you can do this transliteration we have enough assignments. You may work together with Gaurasundara in this connection.

I am always praying to Krishna for your advancement in Krishna Consciousness, all of you, sincere souls. Hope you are all well.

Your ever well-wisher,
A.C. Bhaktivedanta Swami

The Four Defects of the Conditioned Soul

A foolish person who manufactures his own ways and means through mental speculation and does not recognize the authority of the sages who lay down unimpeachable directions is simply unsuccessful again and again in his attempts. (SB 4.18.5)

Although a person is fool number one, he poses himself as very intelligent. Although it is already pointed out that he is in illusion and makes mistakes, he will theorize: “I think this is this, this is this.” But he does not even know his own position. He writes books of philosophy, although he is defective. That is his disease. That is cheating.

Hridayanandas /BBT-Bombays perverted Bhagavatam will never be accepted by the devotee community! If anyone reads those books authored by Hridayananda, they will become contaminated and get a wrong understanding of Prabhupada's pure message.

BBT Bombay’s executive Bhima claims that the Bhagavatam without the Cantos 10, 11 and 12 would be incomplete, and how in India everyone only wanted all 12 cantos. So Bhima believes that Prabhupada and Krishna left us with incomplete writings although Srila Prabhupada says that he has given us everything in his books?

If the temples only want the offensive and deviant so called complete set, then why is Bhima so concerned about the KBI original books, holding them hostage with a court order?

"The Acaryadeva for whom we have assembled tonight to offer our humble homage is not the guru of a sectarian institution or one out of many differing exponents of the truth. On the contrary, he is the Jagad-guru, or the guru of all of us." (The Science of Self-Realization, Ch. 2)

However, it was later admitted in ISKCON's official magazine, Back To Godhead, that  Hridayananda and the other 10 "zonal acaryas" were in maya, or illusion, during this period:

"But by the influence of maya, illusion, a different idea soon evolved -- that Srila Prabhupada had appointed eleven "pure devotees" to serve as the only gurus after him. These eleven, the idea went, should each serve as the spiritual master for a specific geographical "zone" of the world. This zonal guru system, as it came to be called, prevailed in ISKCON for about ten years, until its falseness became clear [...] we express our heartfelt apologies for contributing to the hurts and wrongs devotees endured when ISKCON diverged from Srila Prabhupada's instructions." (HH Jayadvaita Swami, Editor-in-Chief, Back To Godhead, #25-01, 1991)

Hridayananda's illusion was so deep that he even went as far as to promote some of these other supposed "pure devotees" in his Bhagavatam "purports". For example:

"we are happily resting in the New Vrindaban community, founded by His Divine Grace Kirtanananda Swami Bhaktipada [...] Outstanding examples of such endeavors can be presently seen in India at the Mayapur Candrodaya Mandira gardens developed by Srila Bhavananda Goswami Visnupada". (Hridayananda, SB., 11.7.6 and 11.11.41, purports, 1st printing, emphases added)

Claiming that Kirtanananda "founded" New Vrndavana is especially nonsensical, since all ISKCON projects established before 1978 were founded by ISKCON's founder, Srila Prabhupada. Despite  Hridayananda's promotion of their exalted status, both of these personalities had to leave ISKCON not long after such statements were made. Both were found to have engaged in illicit activity and were later convicted by the ISKCON Child Protection Office for child abuse. Acknowledging  Hridayananda's illusion in writing such "purports", all such references, along with  Hridayananda's honorific titles of "His Divine Grace" and "Acaryadeva", were removed in later printings.

Such "purports" merely epitomise the maya that Hridayananda's consciousness was in during the whole time he was completing the Bhagavatam. Such illusioned consciousness can be contrasted with the liberated consciousness that gave rise to Srila Prabhupada's error-free, spiritually pure Srimad-Bhagavatam.

The qualification of a person who translates and writes commentary on scriptures such as the Srimad-Bhagavatam is not defined as being ‘influenced by maya, illusion', and having actively participated in the "falseness" of a guru system which "diverged from Srila Prabhupada's instructions". Rather, the real qualification is stated by Srila Prabhupada as follows (all emphases added):

"Transcendental literature that strictly follows the Vedic principles and the conclusion of the Puranas and pancaratrika-vidhi can be written only by a pure devotee." (Cc., Adi-lila, 8.39)
"Unless one is empowered by the higher authorities, or advanced devotees, one cannot write transcendental literature, for all such literature must be above suspicion, or, in other words, it must have none of the defects of conditioned souls, namely mistakes, illusions, cheating and imperfect sense perceptions." (Cc., Adi-lila, 8.72)

"Unless one is tattva-darsi, in complete knowledge of the Absolute Truth, one cannot describe the activities of the Personality of Godhead. [...] But we must select only those books written by tattva-darsis (jnaninas tattva-darsinah), not the books of so-called scholars who claim knowledge only on the basis of a doctorate." (SB., 9.10.3)

"A realized soul, must be. [...] My purports are liked by people because it is presented as practical experience. [...] They are not ordinary... One cannot become unless one is very realized. It is not A-B-C-D translation." (Srila Prabhupada, Meeting with the GBC, 28/5/77)

I have given you everything, so read and speak from the books and so many new lights will come out. We have got so many books, so if we go on preaching from them for the next 1,000 years, there is enough stock. Just like we have spent one day discussing one sloka, so you introduce this system in all of the temples, and very quickly the devotees will make spiritual progress by getting knowledge. (Letter to: Satsvarupa – Los Angeles 16 June, 1972)

Whatever is to be learned of the teachings of Srila Bhaktivinode Thakura can be learned from our books. There is no need whatsoever for any outside instruction. (Letter to: Gurukrpa , Yasodanandana – Los Angeles 25 December, 1973)

There is no need by any of my disciples to read any books besides my books — in fact, such reading may be detrimental to their advancement in Krishna Consciousness. All reading of outside books, except in certain authorized cases such as for example to read some philosopher like Plato to make an essay comparing his philosophy with Krishna’s philosophy — but otherwise all such outside reading should be stopped immediately. It is simply another botheration. If my students cannot even read my own books thoroughly, why they should read others? I have given you TLC, what need is there to read Caitanya Caritamrta translated by someone else. You are right to stop such reading. (Letter to: Sri Govinda – Jaipur 20 January, 1972)

In my books the philosophy of Krishna Consciousness is explained fully so if there is anything which you do not understand, then you simply have to read again and again. By reading daily the knowledge will be revealed to you and by this process your spiritual life will develop.…You may please me the most by reading my books and following the instructions therein and by becoming fully Krishna Conscious in this life time. (Letter to: Bahurupa, Bombay, 22 November, 1974)

I have instructed everything in my books. (Letter to: Dina Dayala, Mayapur, 25 February, 1976)