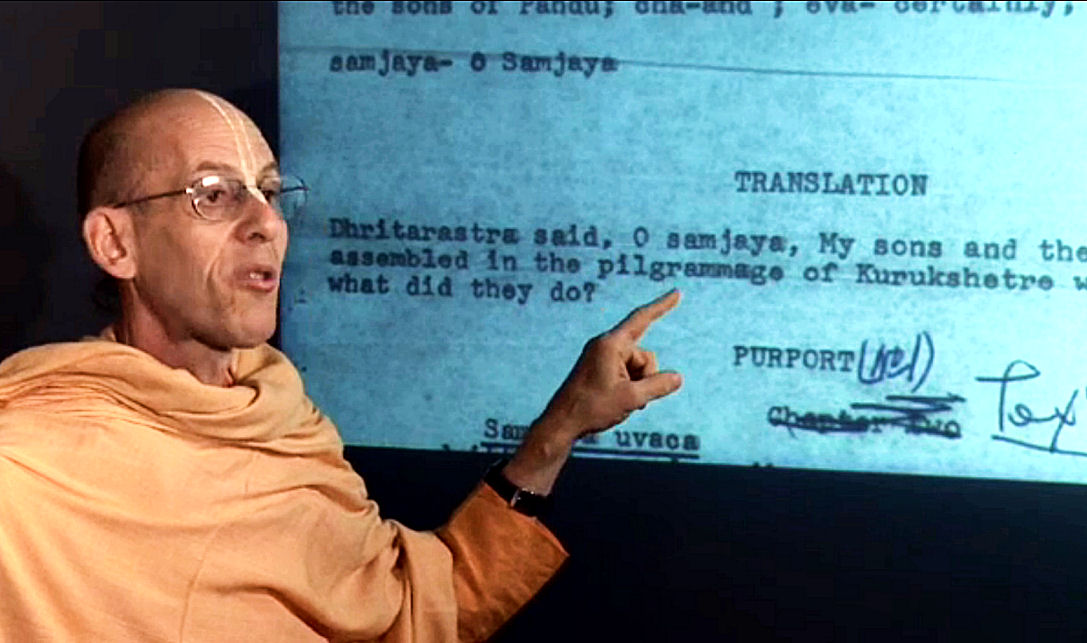 Jayadvaita -- “the devil of re-writing”

The results of unscrupulous editing Srila Prabhupada's books (by Jayadvaita, Dravida and Co.) are on display for all to see if they open their eyes –

Everything would have been solved by putting Jayadwaita’s name on the cover as the editor. That's honest. What is less than that is promoting the illusion that Srila Prabhupada signed off on the present editions.

The BBT continues to compound the problem by publishing the 12 canto's of the Srimad Bhagavatam as if Srila Prabhupada wrote the remainder of the 10th canto what to speak of having not done the 11th and 12th.

Currently, the BBT in India has sued Jitarati Prabhu who published a Prabhupada-only Srimad Bhagavatam set under the KBI license. Those 5000 sets are being threatened with destruction because the BBT doesn't recognize KBI's legally negotiated rights to publish Prabhupada's original editions - unchanged from the time that he was present to authorize them. Moreover, the idea that there are only changes of "mistakes" or "typo's" has been soundly defeated by the thousands of examples displayed online and by the countless citations by Bhakta Toben.

Devotees can think that their perspective of others views are "factual misconceptions," but they fail to see the other side - the possibility of their own misconceptions. I find the statement that "seem to believe that the 1972 edition reflects what Srila Prabhupada actually wrote and approved of..... is a gross misconception" laughable and sad.

Obviously, Srila Prabhupada approved; he was here to do it. He wasn't here to approve any other editions. Duh. The BBT is honestly dishonest about the current authorship. Of course, many are aware that if they put Jayadwaita Swami's name on the cover, devotees will be hesitant to distribute the books. So they cleverly make the changes, but leave only Prabhupada's name as the sole author. It's just not true.

The idea that there are only mistakes being corrected is also false. There are thousands of changes that are done because the editor, Jayadvaita, believes that it sounds better or more correctly conveys the idea. They have nothing to do with conforming to the original manuscript. These are far from necessary changes. Speaking of any changes, there were appreciations of scholars who read the original editions. They didn't dwell on any mistakes. They appreciated the books without equivocation. Srila Prabhupada was so pleased with their reviews that he ordered the critiques to be separately published and distributed freely.

I am seeking answers only from those who have done thoughful and meticulous research into the post-humous editing of Srila Prabhupada's books. In 1983, I had heard that Jayadvaita Swami had found some errors by Hayagriva Prabhu in Srila Prabhupada's Bhagavad Gita As It is that he was correcting.

I visited his trailer in Alachua and he provided me with approximately 20 pages explaining the edits he had done and after reading them, I could understand that he was restoring the Bhagavad Gita to what Srila Prabhupada had intended. I cannot speak for any editing that was done after that as I did not continue to research them all, but others have, and I want to hear from them.

There were obvious examples like "planet of the trees" and "cattle raising" that had to be rectified, and even paragraphs that were misplaced and put into another purport!?! These are essential edits. How many do you think there are total, and what are they? Thank you very much in advance for highlighting the obvious and not so obvious mistakes his editors made.

If and ONLY if you have taken the time to do this research, please give your examples of essential edits that you are very confident that Srila Prabhupada would have wanted restored.

All glories to Srila Prabhupada and his life transforming books!
Gaura Das

Niscala Devi Dasi:  Prabhu, I got interested in the book change issue years ago, and from the website of those protesting the changes, acquired the original manuscript, the Hayagrivs edition and Jayadvaitas edition. I painstakingly went through every gita verse, and to my shock, apart from grammatical changes which didn't alter the meaning, all the changes were back to the original manuscript. I was shocked, as they were present it like the changes were Jayadvaitas speculations. So I gave up that endeavor to expose changes in meaning.

The two changes (recorded on audio) of Srila Prabhupada requesting a specific correction were "cattle raising" to "cow protection" & that mentioned above for 13.1-2.

There are more, but I was simply pointing out those that are blatantly obvious by a reading of the unrevised edition. Others are discerned by going back to the "manuscript", which I haven't done.

The purport you're referring to, Gaura Prabhu, is likely 8.18 which had 8.19's purport instead. As a clarification, the ones I pointed out were not Srila Prabhupada's words or mistakes. They were mistakes done in typesetting, transcription, & production by others. "

The editors of the Second Edition caught the mistake and restored it to its original place, describing understanding in the mode of ignorance as the Purport to 18.32.

'The devotees are always in My heart..."

The problem with this is, Srimad Bhagavatam 9.4.57 actually says:

which can be translated as "Me [Lord Śiva], Sanat-kumāra, Nārada, the most revered Lord Brahmā, Kapila [the son of Devahūti], Apāntaratama [Lord Vyāsadeva], Devala, Yamarāja, and Āsuri ..."

If you look in your Ninth Canto you will see that this is part of verses 9.4.57-59, which Srila Prabhupada translates together, in which Lord Siva is describing various persons to whom past, present and future are known.

"I am completely under the control of My devotees. Indeed, I am not at all independent. Because My devotees are completely devoid of material desires, I sit only within the cores of their hearts. What to speak of My devotee, even those who are devotees of My devotee are very dear to Me."

The verse Srila Prabhupada actually quoted in this Purport is verse 9.4.68. The Second Edition quotes the right verse with the right translation, thus:

'The devotees are always in My heart, and I am always in the hearts of the devotees. The devotee does not know anything beyond Me, and I also cannot forget the devotee. There is a very intimate relationship between Me and the pure devotees. Pure devotees in full knowledge are never out of spiritual touch, and therefore they are very much dear to Me.'”

Another example given by Akruranatha das to show the speculations of the edits who did the best they could because of limited access to books like Gita Mahatmya at the time  :

At the end of the Introduction, Srila Prabhupada concludes his lecture (anyone can listen to the recorded lecture from 1966) by citing and explaining the verses of Sankaracarya's Gita Mahatmya.

This conclusion of the Introduction begins on p. 27 of my siftbound 1972 MacMillon-Collier edition.

But the 1972 editors did not have access to the Gita Mahatmya, so they just substituted a verse from Bhagavad-gita, as follows:

"In conclusion, Bhagavad-gita is a transcendental literature which one should read very carefully. It is capable of saving one from all fear.

All of the Sanskrit verses from Gita Mahatmya that Srila Prabhupada quoted and explained in the lecture were left out of this concluding climax of Srila Prabhupada's lecture.

That is another major mistake (or it may be counted as 7 to 10 major mistakes, though they are all the same category of mistake, for the same reason.) The editors in the early days did not know how to deal with the Gita Mahatmya because they did not know where to find it and did not know Sanskrt."

( It sounds fanatical to keep speculations and not what Prabhupada intended, doesnt it ?  )

The funny part is, "sea journey". You must have read about the churning of the milk ocean in the Eighth Canto. Srila Prabhupada dictated "churning", someone transcribed it as "journey", and the editors did not notice the mistake. The later editors fortunately corrected it. The second edition says:

"The devotee demigods and the demons (asuras) once took part in churning the sea. From this churning, nectar and poison were produced, and Lord Siva drank the poison."

Concerning The Actual, Legal Identity Of The BBT