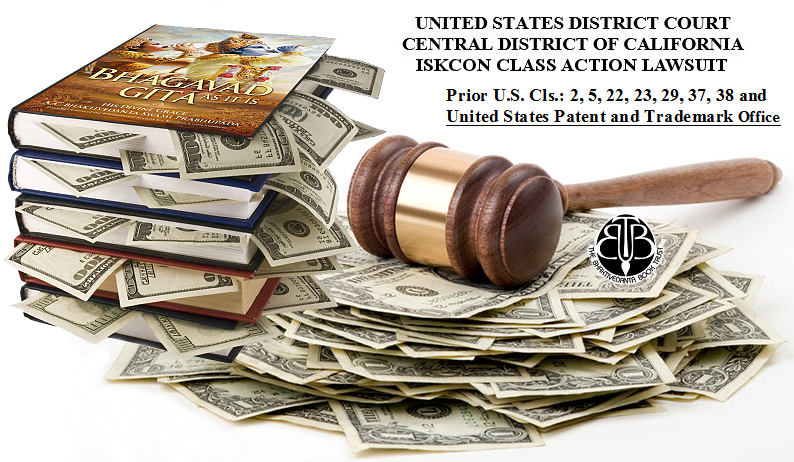 "Could we organise a thousand devotees to file a class action case in the USA to get back our rights to print and distribute Srila Prabhupada's original books and even take back the BBT and use it as Prabhupada instructed. If we just each gave $100 we would have enough to get going and the rest would come guaranteed.”

Will Lord Chaitanya's plan of every town and village manifest without Prabhupada's books?

How many of us are aware that there is a concerted effort to completely wipe out Prabhupada's books and that the plan is in the final stages?

Aside from this case of impounding these 5,000 sets of Bhagavatams, there are many other signs.

• Have you seen an ISKCON book table recently?
• Are you aware that BBT California was never made active as per Prabhupada's instructions.
• BBT Trustees are simply an imagination as there is no active Trust to watch over and protect. BBT Bombay signed over all it's rights to BBTI in 1990.
• BBTI is a corporation with no trustees but with directors who's business is to revise Prabhupada's books and introduce other books by conditioned souls.
• Anyone who objects must be vigorously defeated. (Resolution 11 from 1986 BBT International Trustees meeting in Dallas.)

Ok, that's their plan, but Krishna has a plan also. Sure, He can do it without us, but what is the purpose of Bhagavad-gita then? Krishna didn't think too well of Arjuna's plan to avoid the fight.

Could we organise a thousand devotees to file a class action case in the USA to get back our rights to print and distribute Srila Prabhupada's original books and even take back the BBT and use it as Prabhupada instructed. If we just each gave $100 we would have enough to get going and the rest would come guaranteed.

Could one devotee in India step forward and file a special case against the illegal activities of the BBT. I can't do it because I am involved in the other case. It is time for action.

Any action that needs to be taken must happen in USA or Europe.

In INDIA, forget about getting anything done. ISKCON is too powerful, unless you have millions of dollars like MPD's elite "all Indian" group who keeps fighting ISKCON in the courts, making their lawyers very rich.

JPS and his Bengali mafia controls Mayapur. Radhanath Swami and disciples control Juhu/Mumbai. Gopal Krishna Goswami strictly in control of Vrindavan, especially in New Delhi where he quickly stop Thompson press from releasing the 5000 sets of S.B. books, he is controlling Bhima das & BBT India, in his pocket judges and dollars to bride them.

Count me in for a donation if we can organize legal action outside INDIA and/or will contribute to finance book printing of original Srila Prabhupada books outside INDIA.
Bhima das told me in Juhu he will supply original books if asked for distribution here. You have to do what you can with the powerful ISKCON here.

Living here approx 10 years and going to ISKCON temples for association (no leaders or gurus please) the good ole boys club rule with an iron hand, with Russians and Indians waiting to be initiated  by the big three and their co-conspirators, enriching their power & bank accounts.

It is time for action, best in California courts, India is too corrupt!

Comment by Urdhvaga Das: I herewith pledge $100 USD as soon the Class Action Lawsuit is started!

Comment by Hasti Gopala dasa: Count me in for one hundred bucks US but give me 60 days as of today. We are now on a fixed income, retired from city bus driving this year. Loving it by the way. Set it up as soon as possible. India is on fire the demons have no bridges left with no escape from Lord Yamaraja's wrath. It will be nice to get back on the field after so many years in more ways than one. The responses so far from this article have been very inspiring. Let the final phase of the second Battle Of Kuruksetra begin.

Comment by Rathayatra dasa: Count me in for a donation if we can organize legal action outside INDIA.

Please accept my humble obeisances, all glories to Srila Prabhupada.

Any action that needs to be taken must happen in USA, Canada, Britain AND Europe.

Go to court and file suit but simultaneously go to the court of public opinion. Expose the demonic opposition to the real ISKCON using Srila Prabhupada’s voice. He is still leading us, he is still inspiring us, he is still living and he is still speaking from his books. We would not even think about going to court without Srila Prabhupada. We are trying to represent Srila Prabhupada in this case so we must also let the defendant speak. His books are the law books. Use a frontal attack first and expose who they are from our war plan The Gita. Specifically Chapter 16 the Divine and Demonic Natures. Krsna is above all law because He is the law. Bold statement? You bet. When the counter attack comes they will be in a weakened position because their opposing laws are contrary to what they have been allegedly defending. That will become more than obvious to those exposed to these truths. Use the original Gita it has all what you need to end the demonic alleged rule of ISLCON and begin the liberation of the truly pious.

Radanatha Swami, Gopala Krsna Swami, Bhakta Caru Swami and JPS are indicated specifically in this chapter. But that is simply my free opinion for the world to understand so that they may protect themselves from these individuals and all that they represent.