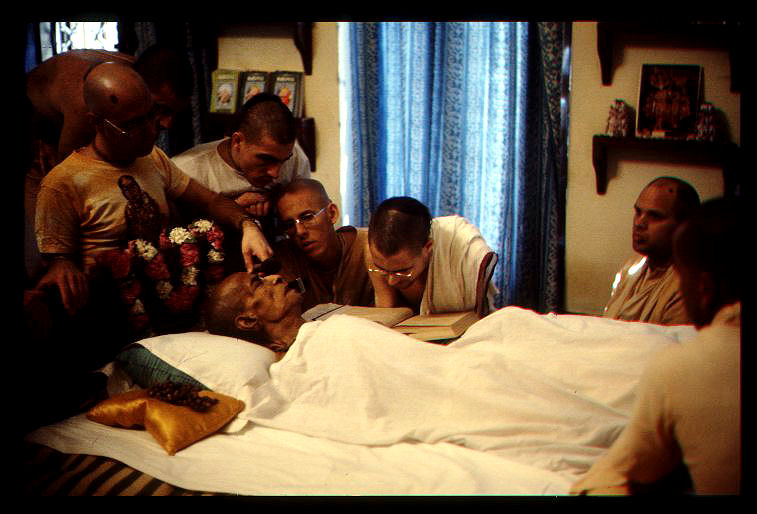 THE POISON ISSUE IS 100% FACTUAL

Bhavananda: (in low whisper mode) (Background -loud Hindi speech from the Kaviraj ), “Prabhupada is trying to trap us”

Tamal Krishna: (in louder clearer mode, practically on the level of a low sound conversation), (Background -loud Hindi speech from the Kaviraj),  “Put the poison, Put the Poison in different containers, that’s all, its alright, no other way” Audio Clip in MP3 Format - [(((audio)))]

Tamal Krishna:  (in louder clearer mode, practically on level of a low sound conversation) “Ultimately what Prabhupada decides, we will do”

Tamal Krishna: (in louder clearer mode, practically on level of a low sound conversation) “ Yeah, but it goes on, as Prabhupada goes on, his disciples also go on”.

The above particular audio portions of the conversations between Tamal Krishna and Bhavananda are yet the clearest and most easy to identify sound vibration proof regarding Tamal Krishna Maharaj and Bhavananda’s involvement in poisoning Srila Prabhupada. Indeed these above audio sounds are practically in the category of low sound conversations (rather than faint whispers), which can be heard by the naked ear, provided one takes a little time to pay some attention. There is absolutely no need for a forensic examination for these particular conversations to convince the Devotee world, or for that matter any open minded Karmi. These above audios are comparatively even clearer than the famous low sound whisper, namely “ Put some poison in the milk”, by Tamal Krishna, which is found in the beginning of this CD. Still, many devotees can also even hear this one, provided they also take the time and pay special attention to do so.

The GBC and some other devotees foolishly imply by their above example that from now on if every low sound conversations between devotees and Srila Prabhupada, after being examined by the forensic laboratory comes out as something totally opposite and irrevelant to what is actually being spoken, then we should accept their conclusion as final. Thus it is they who are at fault of actually posing different opinions from general common sense. Therefore we appeal to all readers after hearing these above audio sound conversations by Tamal Krishna and Bhavananda, for their feedback on whether they are what we have clearly mentioned, or whether they are the nonsense stupid version as presented by the GBC./some other devotees,

Thus seeing Srila Prabhupad’s strong determination to leave the room and go out on Parikrama, and having smashed everyones proposal as to why he should not go out,, Bhavananda starts to panic, and  speaks to Tamal Krishna the above audio recording  “Prabhupada is trying to trap us,”  . Bhavananda is hinting to Tamal that Prabhupada seems well aware of their plan to keep him in his room and obstruct him from going out on Parikrama, and Prabhupada could be aware that they are both trying to poison him. Thus by Srila Prabhupada being able to go out, he is setting up a trap for both of them.

Tamal Krishna immediately replies in a so call cool, but calculated manner, to Bhavananda, implying that since this is the case, since they cannot stop Srila Prabhupada from going out on Parikrama,( “Ultimately what Prabhupada decides, we will do”)  then the best solution is to – “ Put the poison, Put the poison in different containers , thats all, its alright- - - no other way”.  [(((audio)))] By this statement one can clearly understand that Tamal Krishna was the ringleader in the poisoning of Srila Prabhupada, and is now reassuring Bhavananda (who is simply a toy puppet following Tamal Krishna), not to panic, with the words ”Its alright”.  That even if Srila Prabhupada does go out, and they may not have such an easy chance as before, they will still be able to continue to poisoning him, once the poison is “put in different containers”. Because the poison was to be put in different containers, thus being spread out, it would still be easy to get access to, and the poisoning business would go on.

Tamal Krishna also reluctantly, and having no other choice, is accepting the point by speaking  “Ultimately what Prabhupada decides, we will do”,  but yet very demoniacally, and not at all befitting a true disciple makes the next obnoxious statement “ Yeah, but it goes on, as Prabhupada goes on, his disciples also go on”. Readers, please  judge the mentality of such a ‘disciple’. Indeed it is the same competitive mood that we all have with Krsna and which has led us all to leave the Spiritual world and come down to this rotten material world, and which Srila Prabhupada describes as our sinful desire to be the competitor of Krsna, instead of his servant. By this statement, Tamal Krishna is competing in his typical independent mood with the pure representative of Krsna, with the challenging words “ as Prabhupada goes on, his disciples also go on”.