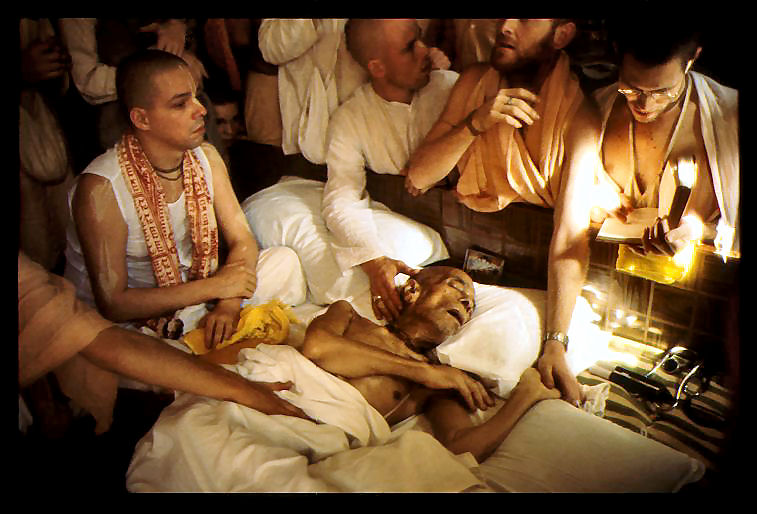 "A number of time he (Srila Prabhupada) would say: 'Can you give me
medicine, please give me medicine. That will allow me to disappear now...'

Audio-Transcription: "A number of time he (Srila Prabhupada) would say: 'Can you give me medicine, please give me medicine. That will allow me to disappear now...'  And other times... 'I want most now to disappear... I want to die... peacefully... let me die peacefully.' Now on one hand we could take it and give him that medicine or let him stop eating... fast until death, we could have done that."

In other words, Tamal is saying he had some authority to poison Srila Prabhupada to get him out of the way, because Prabhupada had asked to be poisoned. And why he was saying this, because he was thinking he might have to cover his tracks, when this poison issue might finally come out. And when it did would come out, that was going to be his excuse.

COMMENT: "Prabhupada wanted some medicine to die - so we gave it to him, because we are faithful, obedient disciples?" WHAT A CRAP.

ALL REAL DISCIPLES AND FOLLOWERS OF HIS DIVINE GRACE A. C. BHAKTIVEDANTA SWAMI PRABHUPADA REJECT THESE STATEMENTS OF TAMAL KRSNA GOSWAMI (TKG)

Srila Prabhupada would never use the word "disappear" in the first person! This is how the passing of a Devotee is describe by OTHERS! I DID NOT POISON PRABHUPADA. In fact, NOBODY POISONED PRABHUPADA.

The idea that SRILA PRABHUPADA WOULD COMMIT SUICIDE is a very non Prabhupada way of doing things. Its completly in the mode of ignorance normally. AS AN ACARYA, to show how to leave the body by suicide is not a very perfect example. Furthermore as an ACARAYA and thus a teacher showing by his own exemple for common peole to follow its highly unlikly that he choose the way of leaving in the mode of ignorance as well by taking drugs. After all SRILA PRABHUPADA warning that dying under the influence of a drug is very dangerous beacause it unables one to think of Krishna.

Why would Srila Prabhupada wish to commit suicide, when he teaches in his books, that suicide is sinful?

Prabhupāda: By suicide he becomes a ghost. That is more troublesome. Yes. Because the body given by God, he is killing. So from this body he has to accept another body. So unless that point comes, he has to remain a ghost. You have committed so many sinful activities, and simply by killing you are trying to escape. In that way you are committing another sin. You are committing another sin. Therefore these persons who commit suicide, they become ghosts. Suppose I have to live in this body eighty years. I'll make suicide. So up to five years I have to remain a ghost, no body. Then it may be chance to get another body. This is wrong. Killing of any body, because na hanyate hanyamāne śarīre. (Philosophy Discussion)

The following MP3Audio clip gives a complete section of the conversation in question. MP3Audio file of Vrindavan conversation

"A confused, frustrated man cannot get relief by committing suicide because suicide will simply lead him to take birth in the lower species of life or to remain a ghost, unable to attain a gross material body. Therefore the perfect course is to retire altogether from sinful activities and take up Kṣṇa consciousness. In this way one can become completely perfect and go back home, back to Godhead." (SB 4.26.10)

"One day Śrī Caitanya Mahāprabhu said to Sanātana Gosvāmī, "Your decision to commit suicide is the result of the mode of ignorance. One cannot get love of God simply by committing suicide. You have already dedicated your life and body to My service; therefore your body does not belong to you, nor do you have any right to commit suicide. I have to execute many devotional services through your body. I want you to preach the cult of devotional service and go to Vṛndāvana to excavate the lost holy places." (CC Antya 4)

"Acts such as suicide are influenced by the mode of ignorance, and in ignorance and passion one cannot understand who Kṛṣṇa is." (CC Antya 4.57) "Measures like suicide are causes for sin. A devotee never achieves shelter at Kṛṣṇa's lotus feet by such actions." (CC Antya 4.60) "After hearing this, Sanātana Gosvāmī was exceedingly astonished. He could understand,"My decision to commit suicide has not been greatly appreciated by Śrī Caitanya Mahāprabhu." (CC Antya 4.72)

"Even if a common man sees someone preparing to commit suicide, it is his duty to try to save him. He does so automatically. There is no need to appeal to him. Therefore when Lord Śiva appeared from the fire to check the demon from suicide, it was not as a very great favor to him." (Kṛṣṇa-Book 2-33)

USA, April 3, 1999 (VNN) — VNN has published an audio clip of a taped conversation between Tamal Krishna Goswami and Satsvarupa Goswami recorded in Vrindavan, India in 11/77. The following RealAudio clip gives a better and more complete section of the conversation in question. MP3Audio files of Vrindavan conversation (10:14 min - MP3 audio)

The original March 31, 1999 VNN article:
Srila Prabhupada: "Please give me medicine- I want to die."

On the tape Tamal Krishna Goswami makes the following statement:

"A number of time he (Srila Prabhupada) would say: 'Can you give me medicine, please give me medicine. That will allow me to disappear now...' And other times... 'I want most now to disappear... I want to die... peacefully... let me die peacefully.' Now on one hand we could take it and give him that medicine or let him stop eating... fast until death, we could have done that. And yet it seemed... off course we could not... do that out of our love for him and he seemed to respond so beautifully to that... our loving requests... that he would not leave... that he... he stay with us longer."

VNN has verified the authenticity of the audio tape carefully. The discovery of this audio tape may shed new light on the ongoing poison investigation. The statement "we could take it... give him that medicine... we could have done that" made on the tape could be considered proof that at least at one point the option to poison Srila Prabhupada with 'medicine' was under consideration and possibly discussed by some of his leading disciples, which they have until now completely denied.

COMMENT BY NITYANANDA: Well, now there are more questions for Tamal. How can he have said these things once in 1977 and never again since then? It appears to be the planting of an idea, of a rationale for poisoning, should it be discovered that something was unusual with Srila Prabhupada's departure. If the poisoning was discovered, then Tamal could explain that it was Srila Prabhupada's dying request? This absurdity is unacceptable. Tamal is untrustworthy (seeAppendix 15). Satsvarupa, in the tape, confused, asks Tamal for clarification, "So, do you think Srila Prabhupada left untimely?" If this becomes Tamal's explanation for the arsenic in the hair, why choose a horrible death by arsenic for a mercy suicide/killing? Remember that 3 ppm average in a half-inch of hair reflects 30 days, not just a final day's mercy poisoning. Also, from ingestion to hair deposition takes up to 30 hours, and the hair would not contain that last day's poison anyway.

Srila Prabhupada: "So as Krsna was attempted to be killed, many, many years before He appeared... At eighth child, if the mother produces child yearly, still ten years, eight years before His birth, the mother was to be attempted to be killed. SO THERE MAY BE ATTEMPT LIKE THAT. And Lord Jesus Christ was killed.  SO THEY MAY KILL ME ALSO."  (Conversation Honolulu 3/5/76)

"So there are these  snake-like persons. They are envious about our movement, and they are opposing. That is the nature. Prahlada Maharaja also was opposed by his father, what to speak of others THESE THINGS WILL HAPPEN... HE WAS ALSO SERVED WITH POISON." (Srimad Bhagavatam Lecture Mayapur 28/02/77)

"THAT IS MY ONLY REQUEST, THAT AT THE LAST STAGE  DON’T TORTURE ME AND PUT ME TO DEATH." (Room Conversation Vrindavan 3/11/77)

It is really strange that a guru and pure devotee of Krishna has to beg his disciples not to torture him to death???