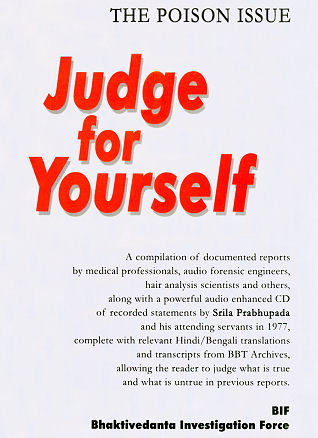 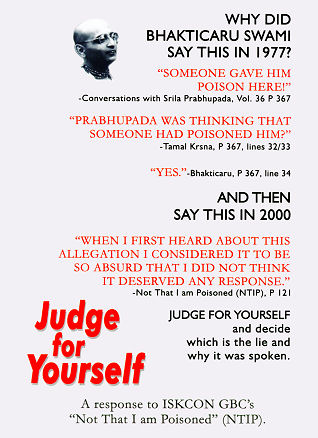 Download the E-Book: "Judge for Yourself " - BIF - Bhaktivedante Investigation Force

JFY – Judge for Yourself
A response to ISKCON GBC’s
“Not That I am Poisoned” (NTIP).

QUESTIONS TO JAYAPATAKA CONCERNING
THE POISONING OF SRILA PRABHUPADA

Your disinclination to submit a statement in connection with the mysterious circumstances surrounding the passing of His Divine Grace, A. C. Bhaktivedanta Swami Prabhupada, may appear strategically acquittable to you, but does no such thing for those investigating the evidence.  Although convinced beyond measure that you will remain silent, hence uncommitted, your constant presence at the deathbed of His Divine Grace in 1977, involves you directly in the allegations of poisoning made by the deceased, the poison 'whispers', the poison conversations, negligence to report the same to medical authorities and/or Law Enforcement.  Ergo, conspiring to keep secret a (possible) homicide in progress, and after the fact.

Having briefly outlined our reasons for making contact, we would like to point out that you have not been singled out as a target for inquiry. Bhakti Caru Swami has also been contacted. But even at the expense of having his name and reputation tarnished via International exposure, has refused to answer even the most basic questions, which, for any innocent party, would have been effortless.  Our letter to him is accessible on www.b-i-f.com . Should you follow Bhakti Caru Swami's lead in choosing to pretentiously ignore the work being done to effectually bring matters to a conclusion, we will be forced to email this letter/questionnaire out to devotees, media, and Life Members, and upload the same with your bio/ photograph onto the internet where it will hang long after your demise.

Along with these objectives presented for your reflection, we put before you, and in the event of your failing to comply, before the world, the first of our questionnaires to you, Jayapataka Swami.

Questions re. The Poisoning of Srila Prabhupada

Firstly, and of grave concern, we draw your attention to audio tape T-46/B, or BBT publication- Conversations with Srila Prabhupada, Vol. 36, p391. On the tape, we hear Bhakti Caru Swami very clearly saying (Bengali) to Krishna Das Babaji Maharaja: "Aro ek deen pora asho", after which your voice can be heard saying: "Poisoning for a ...(indistinct).".  Then, we hear Srila Prabhupada say in a high pitched voice, "To me?"

We have sent T-46 to the same forensic analyst who worked on the "Nixon Tapes", and are currently awaiting results.

1) What were you saying to His Divine Grace in connection with poison that caused him to raise his voice in question?

Throughout the discussions concerning Srila Prabhupada's wish to go on "parikrama" (T-45/46. Con. Vol 36, p 369-391), you showed yourself to be in agreement. Here are some of your quotes:
a) The kaviraja said....he said that even a healthy cow, if it's kept locked up inside of a room, then it will deteriorate.
b) This kaviraja assures that by taking a little milk frequently during the day...
c) Which holy places you would like to visit, Srila Prabhupada?
d) You are very famous, Srila Prabhupada, wherever you go there will be crowds of people to have your darsana.
e) I'll be back to say that you defy all medical laws....
f) ...if you feel any pain or experience any difficulty, then we can bring you back.

Then, after the quotes transcribed above, we hear you say to Srila Prabhupada- "Poisoning for a...(indistinct)".  We then hear Srila Prabhupada ask- "To me?"  after which we hear no more from you. There is a break in recording, and then we hear Tamal Krishna Swami (who claims to have met with some devotees) make a speech to Srila Prabhupada which ends with: "...So why are we throwing everything out the window, that we must go tomorrow?  I cannot understand".  Then Srila Prabhupada says: "I cannot refuse all your requests".

In the letter to Bhakti Caru Swami, we have asked a number of questions that also apply to you; a perspective witness.  We will now present to you the same facts we presented him, before asking you some fundamental questions that beg answers.  Here are the facts:

Kaviraja: "Yeh Maharaja, yeh kotha aap kaise bola aaj ki koi bola hi ki poison diya hai?........"
Kaviraja: "Dekhye, bat yeh hai, ki koi rakshas ne diyo ho."....
Kaviraja: "Yeh bolte hai to isme kuch na kuch satya he. Isme koi sandeha nahin."....
Bhakticaru: "Someone gave him poison here!"
Tamala Krsna: Srila Prabhupada, Sastriji says that there must be some truth to it if you say that. So who is it that has poisoned?
Tamal Krsna: "Prabhupada was thinking that someone had poisoned him."
Bhakticaru: "YES."
Bhakticaru: "He said that when Srila Prabhupada was saying that (He was being poisoned) THERE MUST BE SOME TRUTH BEHIND IT."
Tamal Krishna: "We asked Srila Prabhupada later what was the cause of his mental disturbance.
Prabhupada disclosed his thoughts that someone has poisoned him." TKG's Diary, 340p.

Here are the questions:

11) Do you concede that Srila Prabhupada (and everyone in the room) WAS THINKING SOMEONE HAD POISONED HIM, or not?

Bhakti Caru Swami has written to us saying: "As a matter of fact, when we heard His Divine Grace speaking in that way, we became extremely worried".

12) Were you also worried.. Why/Why not?
13) Why didn't you alert the authorities to a possible homicide in progress, or after the fact?
14) Who decided against informing Law Enforcement/pathology? Was it you?
15) May we have the names of those who decided not to investigate Srila Prabhupada's plaint?

Here are some more facts:

SP: No, these kind of symptoms are seen when a man is poisoned.  He said like that, not that I am poisoned.
TK: Did anyone tell you that or you know it from before? (Know what from before...that he was NOT POISONED?)
SP: I read something, (Read what...that he was NOT POISONED?)
TK: Ah, I see. That's why actually we cannot allow anyone to cook for you. (Why would Tamal Krishna want to stop "anyone" from cooking for SP, unless he believed in the poisoning as a reality?)

Here's what  the kaviraja had to say:

KAVIRAJA: (translated) "Look, this is the thing, that maybe some rakshasa gave him poison". (...the kaviraja also believed in the poison theory.)
KAVIRAJA: (translated) "If he says (that he has been poisoned) there must be some truth to it.  There's no doubt". (So, there is no doubt in the mind of Srila Prabhupada's attending doctor.)

It appears that Srila Prabhupada, Bhakti Caru Swami, Tamal Krishna Goswami, and the Kaviraja, are all convinced in the poisoning as a fact. Now Maharaja, in light of the evidence presented above, we ask you:-

16) Do you accede that His Divine Grace had apprised you (et al) of his poisoning?
17) Do you concede that everyone there attested to the fact?
18) Considering the evidence- why did you enter into a conspiracy to keep the evidence hidden?
19) Why have you not entered a statement to clarify your position on this matter?
20) Why did you instruct your disciple to publish a book of deception (Not That I am Poisoned) only after the truth was discovered, and to protect you and your confederacy from suspicion?
21) Do you or don't you accept the 'not that I am poisoned' excerpt, behind which you have hidden for four years, to be a distortion of the truth?
22) Do you actually believe, in view of the revelations, that twenty years of silence by YOU and your confederacy does not in fact betray a concerted effort to cover-up a murder conspiracy?

Further, on an occasion in Mayapur, Srila Prabhupada discovered two poisonous snakes in his room. When he called out, you were the first one to dash into his room. In your explanation for rushing up the stairs and being first into Srila Prabhupada's room, you said you had heard Srila Prabhupada call to you in your heart. Could you please elaborate on the story for us. We are very interested in this special spiritual bond you shared with His Divine Grace. But most of all, we are interested in the details of the story itself. Could you help?

Maharaja, in conclusion, we understand that you are seated on the "Ministry for the Protection of ISKCON", the same 'ministry' that published "Not That I am Poisoned"; a book that lied and cheated to protect you and your confederacy from suspicions of murder. Now, after only a little digging, we find you and Bhakti Caru Swami, have never really wandered far from crime or the criminal element. For example- the horrible, and yet to be exposed child abuse in Mayapur, happened directly under the jurisdiction of you and your old buddy, Bhakti Caru Swami.  And, once again we find you two in the chiaroscuro, working overtime to broom damning evidence of perversion and predation under a non-secular carpet.

Additionally, there are many- an inordinate number- of ISKCON confirmed and alleged paedophiles and child abusers who are disciples of Bhakti Caru Swami. And, he has done what he has always done when finding it in his interest to do so, and that is to turn the other way, even in the face of credible evidence against the accused. There is one case where a person whom a Child Protection Office panel determined had illicit sexual contact, including intercourse, with at least one underage girl (beginning when she was 12 and continuing for several years), was a major contributor to the Bhakti Caru profile/fund.  Even after the official decision on the case, Bhakti Caru would reside at the home of this person, support and defend him, etc. Under the circumstances even a pig would walk away, but you Swamis appear to attract criminal depravity, and defend it. Then there was the case of YOUR secretary who was caught in aggressive homosexual activity. The Mayapur Administrative Council, about 2-3 years ago, voted to ban him from the property, or some such sanctions.  But you, Jayapataka Maharaja, overrode the ban. You said that as GBC, you had authority over the Administrative Council. As a result, the sanctions placed on YOUR secretary were thrown out, and his services were retained by you. This behaviour is considered unconscionable even among hogs and dogs.

Devotees and public are yet unaware of the diabolic activity that has been ongoing in Mayapur, and directly under your management.  The world's attention is focussed on the ISKCON child abuse case in America, but the horrible abuse that has taken place in Mayapur, and hidden by YOU for all these years, is yet unknown.  However the truth is about to surface, and when it does, it will show you to be a sinister personality who has never exposed a single felon to legal process, and who is capable of keeping the darkest secrets.

In the vain hope that you will appreciate the importance of cooperating with us in this investigation, we remain

We highly recommend that readers should hear the whispers for themselves also.